GET 10 SECRETS ON HOW TO IMPROVE YOUR MATCHA AT HOME 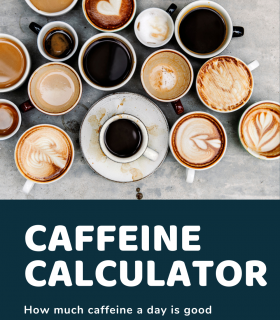 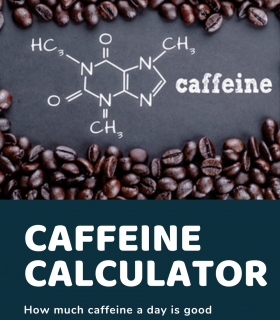 Do you know how much caffeine you put into your body each day? Ever wondered if you’re going over the recommended limit? For most of us, it’s hard to know for sure. So use this caffeine calculator by weight to check your daily caffeine intake, understand more about what you’re drinking, and help keep your body healthy.

Maximum caffeine according to your body weight

Your safe zone is E mg caffeine per day

Do not exceed more than F mg of caffeine per day

This drink contains A mg

Compared with other drinks, the amount of caffeine in this drink is B

Do not exceed C cups per day,
calculated
based on a serving of D ml

Help, I consumed too much caffeine

Always seek the guidance of your doctor or other qualified health professional with any questions you may have regarding your health or a medical condition.

Caffeine is one of the most commonly consumed dietary ingredients in the world. It’s found in coffee beans, cacao beans and tea leaves, and is a natural stimulant.

Its stimulatory properties are why many soft drinks also contain caffeine. Some of the most well-known include Red Bull and Monster. Plus the likes of Coca-Cola, Dr Pepper, and Mountain Dew.

Caffeine can offer benefits to performance, including:

Once consumed, caffeine is quickly absorbed from your gut into your bloodstream. Stimulatory effects usually begin 15–30 minutes after ingestion and last for several hours.

How much caffeine a day?

Despite caffeine’s recognised benefits, moderate consumption is recommended. Of course, ‘moderate’ can mean different things to different people.  A rule-of-thumb is:

A healthy adult without medical issues is generally fine with 200-400mg of caffeine per day without any adverse effects. (5).

This is based on an average person’s body weight. To get a more precise number, use the daily caffeine calculator, where you can add your body weight to this caffeine tolerance calculator to discover how much caffeine a day is acceptable.

Considered a maximum amount of intake of caffeine per day.

How much caffeine can pregnant women have? Several studies have found significant decreases in the monthly probability of pregnancy in women who consume 300+ mg of caffeine daily (3) (4). Therefore attention is required for the consumption of caffeine when trying to get pregnant. A healthy pregnant woman without medical issues are considered to limit their caffeine intake to ≤300 mg/d (5)

Can kids drink caffeine? Yes, according multiple studies a healthy child without medical issues is considered to limit their caffeine to ≤2.5–3 mg per kg body weight per day (4) (5).

After drinking a caffeinated beverage, the caffeine is rapidly and completely absorbed in your body, with 99% being absorbed within 45 minutes of ingestion (8).

The caffeine’s half-life (the time needed to break down 50% caffeine in your body) is about 5 hours (8). In other words, if you consume 20mg of caffeine, 5 hours later 10mg caffeine is still present in your body. The second 50% of the caffeine spends longer in your body than the first 5 hours.

Is caffeine bad for you?

To answer the question is caffeine good or bad, let’s look at both the positive and negative effects of caffeine.
What are the caffeine health benefits and risks?

Is caffeine good for you?

Caffeine can improve mood and create a happy/euphoric feeling.

Physical performance can be boosted by consuming caffeine.

Caffeine can increase your body’s metabolism by 10-12% on average.

Is caffeine bad for you?

Caffeine can reduce your quality of sleep if not consumed correctly, and can cause anxiety.

Even after just a couple of cups, withdrawal symptoms can start to pop up, creating an addictive feeling.

Consuming too much caffeine can cause a form of overdose, leading to negative mental and physical effects.

Is caffeine bad or not?

Caffeine’s benefits are certainly useful – when enjoyed in moderation. The sheer amount of caffeinated drinks can make it hard to keep track of what’s moderate and what’s dangerous. That’s why the best and safest way is with a caffeine calculator.

A new trend to watch out for is “hidden caffeine”. This is where drinks contain caffeine, but this fact isn’t easily seen on the label, and may be buried in tiny font in the back. What’s more, there’s no global rule for indicating caffeine, often leaving many consumers in the dark.

This is the most commonly reported symptom during caffeine withdrawal.

One reason is because caffeine consumption narrows the blood vessels. When you stop or even reduce intake, your blood vessels reopen, which increases blood flow to the brain. This swift change can cause painful withdrawal headaches that can last for hours.

Lots of us consume a cup of coffee or other caffeinated drink for a boost of energy, performance or alertness.

However, suddenly removing caffeine from your daily intake can have the opposite effect. You may experience fatigue or a feeling of drowsiness.

Anxiety is another commonly reported symptom of caffeine withdrawal. Caffeine boosts blood pressure, stress hormones and heart rate, and your body can become dependent on this – both physically and mentally.

This caffeine-created dependency can cause feelings of anxiety, especially when caffeine intake is stopped.

A cup of caffeine from coffee, tea or energy drinks is often used to boost concentration. The increased blood pressure stimulates the brain, which increases alertness and improves focus.

As you become more dependent on that daily shot of caffeine, cutting back can cause concentration problems.

One side effect of caffeine is that it boosts positivity and feelings of happiness. Studies have even found this can reduce the risk of depression. The problem is, quitting caffeine can unmask those negative feelings once again.

Caffeine can enhance mood and create happy feelings. However, people can become irritated, moody or even angry when stopping caffeine consumption. Particularly those who have developed a physical or psychological caffeine dependency.

Caffeine is a stimulant. Like all stimulants, too high a dose can lead to unpleasant effects. Maybe even dangerous side effects that interfere with day-to-day living. Using a caffeine overdose calculator can help to identify this.

While this depends from person to person, a high caffeine intake isn’t really healthy for anyone.
The most common effects of caffeine overconsumption or caffeine withdrawal are:

What do after too much caffeine?

The good news is that these symptoms are usually temporary, and won’t endanger your life.

Can caffeine kill you?

Not usually. The number of people known to have died from a caffeine overdose is extremely small. That’s mainly down to the amount of liquid you’d have to ingest. Recorded deaths have usually occurred after consuming an extremely large amount of caffeine (>10 grams) in a short amount of time.

If you ever consume too much caffeine, you’ll have to recover like you would from a hangover. We suggest next time to make use of a caffeine daily limit calculator to identify your drinking patterns.

5 tips on how to recover from a caffeine overdose:

Want the latest and greatest matcha recipes and news straight to your inbox?

Your Guide Is
On Its Way!

I’ve emailed you your free guide on the Top 10 mistakes when using matcha green tea.

Don’t see the email? Please check your spam folder and move the email into your inbox.

Get 10 Tips To Improve Your Matcha At Home

So You Can Make A Healthy Lifestyle Tasty and Easy!